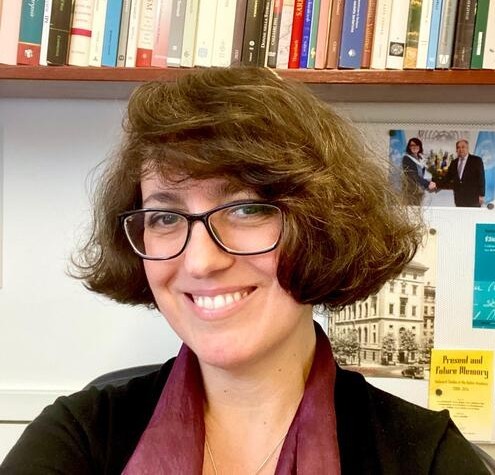 Barbara Faedda is the Executive Director of the Italian Academy for Advanced Studies at Columbia University. She received her Ph.D. in Legal Anthropology and Social Science from the Università Suor Orsola Benincasa di Napoli after studying at Sapienza Università di Roma (Laurea in Lettere). She studied in Paris at the Summer Institute of International & Comparative Law (co-sponsored by Cornell Law School and Université Paris I Panthéon-Sorbonne), and at Boston University (as a visiting scholar).

Dr. Faedda is also Adjunct Professor in Columbia's Department of Italian, where she teaches courses on contemporary Italy.

In 2016 she conceived the International Observatory for Cultural Heritage (IOCH), dedicated to all issues relating to the survival, protection, and conservation of cultural heritage.

In 2019, Dr. Faedda was appointed Ambassador, Permanent Observer for the European Public Law Organization to the United Nations. She presented her credentials on May 21, 2019, in New York to the Secretary-General of the U.N., António Guterres.

In February 2020, she was named The 2020 Illustrious Alumnus/Alumna of Sapienza Università di Roma, the distinguished institution that is more than 700 years old.

Her professional background includes experience in an Italian luxury fashion firm in Rome in the 1990s and a continuing research interest in food, advertising, and visual culture.